Picture this: A plane full of boys scouts, geeks & goobers takes off, and the moment the wheels are up the D&D books come out. As the flight makes its parabolic arc from central PA to Colorado, they attempt to play a game of Dungeons & Dragons across the seats. Several times die rolls go awry and the dice go bouncing down the aisle to the back of the plane where a bemused stewardess returns them. It is the summer of 1980 and I am flying out to Philmont Scout Ranch for a week in the wilderness with several dozen like-minded teens.

Even though we are headed for northern New Mexico, we fly into Denver at the start of our adventure. Our ad hoc scout troop, assembled from across the Keystone Area Council, boards a bus for the long trek south. Along the way we stop at the Flying W Ranch and go to a Pueblo Indian ceremony, all in an effort by someone to create the most ‘western’ experience possible. But little of it makes an impression on us for this was the summer of The Uncanny X-MEN and the Dark Phoenix Saga, arguably one of the greatest run of issues ever in comic book history. 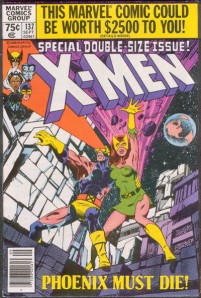 I started out the trip with a short stack of comic books in my backpack and we passed them back and forth on the bus as we drove into the New Mexican desert, guys almost fighting over who got them next. It wasn’t just that we were that geeky, but that the story was that good.

Because this epic tale — which was to cement the future success of both the X-Men and Marvel Comics in general — was coming to a climax right in the middle of my trip west, I was always unsure if I’d find the next edition. I would run into every 7-11 we stopped near, desperately and excitedly spinning the rack of comic books to find the newest release. That summer was the high point of my interest in comic books, and over the six weeks of my vacation, seeking out the latest issue became one of the best treasure hunts I would ever experience.

By the end of our trip, I had accumulated a carton full of new and used titles. As exciting as the daily hunt was, it didn’t compare to Mile High Comics. On the outskirts of Denver, Mile High was THE biggest comic book store in the world at the time, a veritable Mecca for fan boys and collectors. Long before the direct market was invented, their advertisements for back issues were in every single comic book published at the time, and if they didn’t have it, nobody did. As my family pulled into Denver (I having now made a complete loop around the Rocky Mountains since arriving a month earlier), I convinced my dad to take us to the store. Like Mecca, it was a once in a lifetime opportunity. I don’t remember how much of an advance he gave me on my allowance, but I know I spent it all.

I got another reminder this past week of our western trip, as a spectacular crash during the annual Pikes Peak race made the news. I can personally attest to the grueling nature of that road. Even though I had just gotten my license a few months before the ’80 vacation, my parents let me drive most of the way down the mountain. Even taking it slow it was a challenging drive for a 16-year-old.

Climbing Pikes Peak was one of our many goals that summer, and my dad, brother and I made it to the top over a spectacular two day hike. My mom met us there with the car, and what took us two days to go up, took less than an hour to roll down. I pictured myself racing headlong down the mountain, but only a couple of turns into the descent convinced me a more melodic drift would be the better way to go.

As I mentioned earlier, my parents had traveling down to a science. This was particularly true in the car. When we were little kids, she had sewn this huge sleeve for the back half of the front seat — one of the few projects she ever actually finished — that had dozens of pockets for all our toys, books and stuffed animals, all within easy reach. On every trip, during long stretches when we didn’t want to stop for lunch or dinner, she would construct entire meals on her lap in the passenger seat, handing each of us bite-sized portions until the whole family was fed.

While publishing from the passenger seat is now easy thanks to laptops, I remember my dad pasting up an entire newspaper as we drove over the Rockies. In his job as head of communications for the synod office, he was editor of a monthly paper that went to churches throughout Pennsylvania. When he first started his job in 1975, it took him several weeks and the entire surface of the pool table in our basement to layout and paste up an issue. Five years later, while my mom and I drove, he put the whole thing together in a few hours on his lap, stuffed the pages into a large envelope and dropped the package in a mailbox in the next town.

Our entire trip that summer was a logistical feat. I had actually flown out earlier to Philmont Scout Ranch in northern New Mexico for a grueling week of backpacking & mountain climbing with an ad hoc ‘expedition’ troop from Pennsylvania. After dropping me at the airport, my parents and brother drove down along the Appalachians, through the south and across Texas, meeting up with me 10 days later as I came out at the foot of the Rockies.

We proceeded to drive west, into the Painted Desert, the Petrified Forest and the Grand Canyon. Turning north, we took in the Great Salt Lake, Yellowstone and the Grand Tetons. We veered into Idaho and Montana just long enough to buy a soda and check those states off our list. South into Colorado, we careened along mountain roads, pushing the family station wagon so hard it barely made it out of the state —  eventually the car didn’t survive the trip.

When “National Lampoon’s Vacation” came out a few years later, I thought “oh, a documentary.”