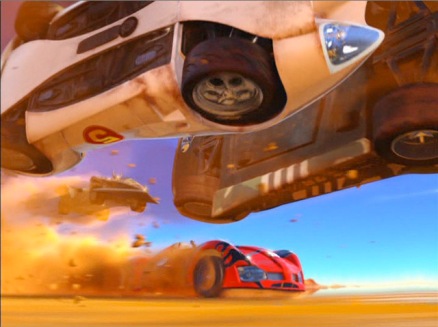 There was a time when “The Matrix” absolutely would have been on this list. It is still a great movie, but the Wachowski Brothers’ two interminable and pointless sequels dissipated its cred. But I had to include a Wachowski Bros. movie in the countdown: in spite of an uneven career, and their tendency toward ever more ponderous and pretentious scripts, there is no doubting the two filmmaker’s imagination and visual daring.

This was never more clear than in their long-awaited, live-action, big-screen version of “Speed Racer,” the famous 1960s cartoon that helped kick off the Japanimation (later anime) craze in the State. While the movie bombed at the box office — by one measure, the 10th biggest loser in history — “Speed Racer” did not fail because of lack of ambition or love of the source material. It certainly didn’t fail visually, as it is one of the most eye-popping, stunningly designed, densely packed action flicks of the last decade.

There are a lot of reasons why “Speed Racer” didn’t do well (my two reviews of it are still online), not the least of which it didn’t know what kind of movie it wanted to be — too political to be a kid flick, too cartoonish to be taken seriously by adults — followed by a disastrous, misdirected marketing campaign. (It was also filmed and edited during the most stressful time of the brother’s life, when Larry Wachowski underwent a sex change operation and became Lana. So, clearly they were distracted.) It is, in the end, simply put, too long; if ever a movie could benefit from a Phantom Edit cut, it is this one.

That doesn’t mean it isn’t worth watching, just that it can be challenging to watch. In the intervening years, the movie has developed a cult following, especially over at io9; and on my other blog, I spent the some months breaking down all the car designs in the film. Turns out there were a lot.

(And how Christina Ricci’s Trixie avoided becoming a gay icon, I’ll never understand. I mean, my god, just look at her.

Bonus entertainment round, for those who made it to the end of this entry! A few years ago, when Inception mashups were all the rage on You Tube, I realized there wasn’t one for Speed Racer. That has since been rectified: 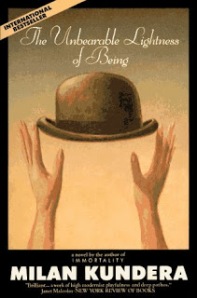 Coming out of a movie theater you were always more likely to hear ‘the book was better,’ though on occasion a film would best the work it was adapted from. Rarer still was the movie that made a perfect companion piece to the source material, both equally adept at telling the same story in different mediums, both supporting each other in a way that made reading one or viewing the other a richer experience. Think High Fidelity or The English Patient. Or another release with a Juliette Binoche connection, “The Unbearable Lightness of Being.”

Kundera’s book, concerning a love triangle in 1960s Prague before and after the Soviet crackdown in Czechoslovakia, has the room to explore  philosophy and the inner life of its characters, while the Phillip Kaufman movie has a texture and immediacy you can only get from film (and the sheer physicality of a very sexy cast).

Whereas both the book and film have similar bittersweet endings, I prefer Kundera’s denouement, with one of the best closing passages ever. Although he was an adviser on the set, Kundera later complained that the movie didn’t get the characters or the “spirit” of his novel right — but then, his book didn’t have Lena Olin in it. 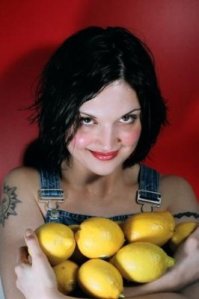 You’re going to hear a lot about Mary Prankster before this countdown is done. The non de plume of a singer/songwriter from Baltimore, Mary Prankster tore a path up and down the east coast over an eight year period, leaving new fans and broken hearts in the wake of her Catholic-Girl-gone-bad persona as she attempted to break into the big time. The self-proclaimed “Queen of Cow-Punk,” Mary put out three near-perfect studio albums before calling it quits in 2004 with a live recording of her final concert.

For sheer word play and song-writing craft, I would put her up with Lennon/McCartney. Yes, I just wrote that. Unfortunately for her, Mary Prankster’s expletive-filled lyrics kept most of her brilliant stuff off the radio, and the ditties she tailored for the mainstream never got farther than college radio and local support on WHFS. It also didn’t help that songs she blew the roof off with in live shows didn’t have the same impact on CD. She was so unhappy with production problems (and her contract and the ever-rotating roster of bandmates), she eventually formed her own label; yet even with complete creative control, her recordings never matched her amazing voice.

All I know is that, the last time my wife and I saw her live, sitting in the back of a tiny club in Carrboro, Maura leaned over and said to me: “Look. You can see the whole bar falling in love with her.” Mary Prankster’s fans were amazingly loyal — you didn’t find her stuff on file sharing sites, and only some of the songs from her second record, “Roulette Girl,” are available on youtube. Here are two: 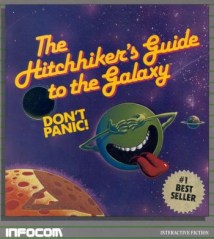 Way back in the year 1984, when personal computers were the size of small goats and had the power of pocket lint, computer games were essentially bits and bloops that implied something more than represented it. There just wasn’t enough memory or power in the hardware of the day.

The fastest way around this limitation was by using … text … just words. Simply describe the scene and let the player fill in the details. Infocom made millions selling a dozen or so of these text-only games, wherein players typed in what they wanted to do (“Get Lamp“), and proceeded to have grand adventures exploring dungeon mazes, vast kingdoms‚ or a whole galaxy, all by typing in a few words or phrases.

“Hitchhiker’s Guide to the Galaxy” — first a radio show, then a book, then a TV show, then a computer game, thereby entirely by accident becoming the first transmedia success story — became Infocom’s all-time best seller by tapping into what made “Hitchhiker’s Guide” so successful in the first place: Douglas Adams’ adroit use of language. Each iteration of H2G2 followed the hapless protagonist, Arthur Dent, on a improbable adventure across the universe after Earth is destroyed, and the computer game proudly continued this tradition in suitably maddening fashion.

Best yet, because the game was text-based it wasn’t limited to the latest operating system, meaning  — unlike virtually all other computer games that are eventually left behind as upgrades abandoned them — it could still be played on today’s computers. And even if you didn’t buy a copy back in the day, the BBC offered a free, updated version of the game to celebrate the 20th anniversary of the original. 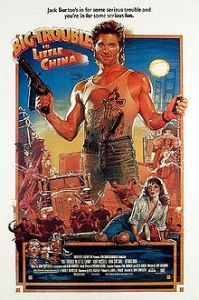 Making a movie really is alchemy. You mix all these elements in a crucible and hope you’ve created gold when you’re done. Most of the time all you get is lead. But when it works — especially when it shouldn’t work — it truly is magic. Such is the case with John Carpenter’s kung-fu homage, “Big Trouble in Little China.” It should have been a disaster but Carpenter pulls it off (in what is arguably his last good movie) by going over the top and having fun at the same time. There is a true impish joy to this genre mashup that relishes just how ridiculous the whole thing is, with a cast that goes all in. It doesn’t hurt Kim Cattrell is at the peak of her coquettishness, or Kurt Russell gets to chomp the scenery with wild abandon as an incompetent John Wayne-wannabe who still saves the day. Like I said, it shouldn’t  work, but it does.

My best friend from college died of cancer before she was in her 30s. Lisa wasn’t a fan of R.E.M. — I don’t even know if she liked them; she was always more funk and R&B than anything else  — and she certainly never heard this song, as the album it appeared on (“Out of Time) dropped a month after she was buried. Yet every time I listen to Texarkana, I think of her.

1) I just checked my blog stats, and more visitors came to my site when I wasn’t doing anything in July than when I posted regularly in June. So — more people read me when I’m not writing? Does that mean if I quit, my blog hits would reach infinity?

2) WordPress, facebook, twitter, tumblr and vimeo really don’t play well together, do they? “Publicize”  doesn’t work as advertised, and it’s clear that each social service wants to be the ‘main’ one — reducing the incentive to make sure their share options are optimal.

3) Reddit is the new Country Club. If you want to get in, better know someone there already.

It is now 142 days until I turn 50, and I still have at least 142 favorite things to write about. That’s one a day, folks. Can I make it in time? Will I be able to post once a day until my birthday on January 4th? Find out, starting today.

But first, a question. Is anybody reading these? Any one miss 50/50 when it was gone? Any thoughts or comments going into the home stretch? Operators are standing by…

A little video I put together for your amusement

gifs via a buddy now works at National Geographic. The second I saw them, it was clear they had to be set to music