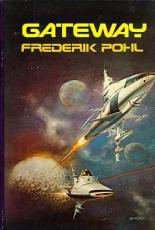 In Good News/Bad News news this week, it was announced that “Gateway,” Frederick Pohl’s bleak ’70s masterpiece, has been optioned for development as a TV series. Considering how dark and full of existential dread television has gotten in the last decade, Pohl’s novel of desperate humans on an abandoned alien starbase will fit right in. On the flip side, the production team that snagged the rights is one half De Laurentiis and one half the people who brought us the awful wild west mess “Hell on Wheels.”

Which is a shame. If any novel is well suited to episodic TV, it would be “Gateway” — but only if it was done right. Set years after the discovery of an asteroid full of alien ships is found orbiting the sun, the book chronicles the horrible living conditions humans endure on Gateway, all in the slim hope they might strike it rich. Unable to control, dismantle or decipher the pre-programmed ships, people gamble their lives by climbing in the alien vehicles and hitting the launch button. Most of the time the ships never return, and when they do the crew is frequently dead — on rare occasions, however, someone returns with an alien artifact or other great discovery, one that sets them up for life. Crossing a gold rush with Russian Roulette, the novel is, according to this reviewer, “coated in dread.”

While the core of the book is the unpacking of the mystery of what happened to the protagonist — and the slow unraveling of his post-traumatic stress — the most powerful parts of “Gateway” are the one-page ephemera that divide chapters. Official mission reports that detail the fates of random prospectors, made all the more horrific by the memo’s cold and bureaucratic language, bolstered by snippets of classifieds from Gateway’s newspaper of people reaching out for a connection — any connection — in an uncaring universe.