I’ve really enjoyed the rise of Future Islands, a Baltimore-by-way-of-North Carolina band that recently hit critical mass — if for no other reason than I always feel like I’m back in college when I hear them. The time I first saw them, I jokingly described them as A Flock of Seagulls… if Tom Waits had been the lead singer. While Future Islands’ style has since become distinctively their own, they still sound like a they just came through a wormhole from the 1980s.

Hopefully they will avoid the fate of A Flock of Seagulls, better remembered (and mocked) now for their hair than the droll synthpop of their New Wave hits. “Space Age Love Song” and “Wishing (I had a photograph of you)” ensured they wouldn’t be one-hit wonders, but so what — it is “I Ran” that will be played again and again (as it was just about every hour on MTV in 1982). My freshman year at IUP the local automated radio station played it so religiously you could set your clocks by it, and there wasn’t a dorm you could walk through without hearing it echo down the hallway.

As with Blondie’s “Heart of Glass,” I could listen to the bionic reverb that makes up the backbone of the song on an infinite loop. Forget about the hypnotically-bad haircut; “I Ran” is mesmerizing all by itself.

Bonus North Carolina connection: After their last hit in 1984, A Flock of Seagulls went into a slow spiral over the next decade or so. The breakup, when it came, was painful, and created a rift between the two brothers at the core of the group. They reportedly didn’t talk to each other for years. It turned out that Alister Score, the drummer, now lives just north of here, one county over. When lead singer Mike Score formed a new version of the band for an ’80s oldies tour in 2008 with Naked Eyes and Human League (cripes it hurt to type that line), and played at nearby Koka Booth, he invited his brother to sit in and play the drums for “I Ran.” Awwww. 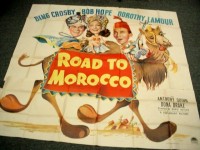 I first met Mike Ritter in 1999, on the rooftop patio of this great little bar in Chattanooga. Directly across the street from the daily newspaper, it was where all the reporters went to drink after deadline (or, maybe, before), so we cartoonists felt right at home. Mike was going on and on about the classic ‘Road to …’ comedies of Bob Hope and Bing Crosby, which, as I would soon discover, were not just his favorite movies, but quite possibly his favorite anything. I remember thinking at the time, ‘no one can talk about Dorothy Lamour’s outfits for 20 minutes and not be gay.’ So, got that right….

Others have recounted his incredible talent, wicked wit, and sense of humor. All true. Mike’s passion and insight were keenly refreshing. He once described the AAEC convention as a necessary way station to recharge his inspiration every year, always giving him just enough of a kick to make it through to the next year’s convention. ‘It’s like one of those turbo boosters on a Hot Wheels track, launching the car around for another lap.’ There isn’t a cartoonist gathering I’ve gone to since where I haven’t thought about that.

I loved Mike’s drawing style and warped perspective — both literally and figuratively. As energetic as his line could be, his work often had a dark tinge to it, full of shadows and inky blackness. My all-time favorite cartoon by him was one on a national frenzy over a huge lottery jackpot, after people had reportedly spent their savings on tickets. A forlorn figure hunches over a pile of shredded lottery tickets in the middle of a vast, empty apartment. The small child sitting on the floor looks up at the figure and asks, “Did we win?” It is heartbreaking.

(I couldn’t find the lottery cartoon, but here’s an appropriate one.)

Looking back now, I realize it’s been almost 10 years since Mike and I talked, twice as long as the handful of years we were friends. We worked together when he was President of the AAEC, but even then it was clear he was starting to pull away. Mike got harder and harder to get ahold of and, as happened to so many of us, stopped returning my calls altogether. I was happy to hear he had resurfaced in Atlanta a few years ago, apparently successful in rebooting his life.

It sounds as if Mike had begun to reach out to old associates recently. We had friended each other on facebook and traded a few chats, but his untimely demise ended that chance to get drinks and catch up.

You know, I believe “Road to Morocco” might cheer me up. I know Mike would enthusiastically agree.