Archive for the ‘Hold Me Now’ Tag 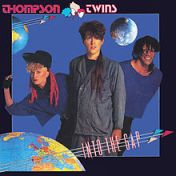 Um, yeah. I did have hair like that. Rat tail, guilty as charged.

The ’80s are easy to make fun of, especially the fashion. Often deservedly so. You can blame MTV but they were really just enablers. Still, you could find artists at that time whose hairstyles and earclips met their overly-earnest songwriting skills at least halfway:

If you want to find a quintessential ’80s band, however, look no further than the Thompson Twins. Originally, ironically enough, a seven-piece from England, Thompson Twins were a look in search of a sound, which they eventually found after paring down to a trio. Dismissed as mere hairstyles and lightweights by the British music press (pretty damn funny when you think about it), they still went on to considerable, albeit short-lived success, thanks to their huge hit “Hold Me Now.” The song benefited from particularly lush production values and the trilling reverb of a bank of percussion instruments (including the xylophone) not usually heard on a pop hit, and it holds up exceptionally well, even today. Certainly better than the haircuts.

It’s also rather sweet and pathetic, in that puppy-dog way that only sad 20somethings can convey. It doesn’t help that “Hold Me Now” was everywhere the semester after my college girlfriend dumped me. However, she’s not my go-to thought whenever I hear it; we were long done by the time Thompson Twins showed up on tour at IUP late that spring — coincidentally around the time their song peaked in the Top 40, meaning we saw them at the very apex of their career — and they put on one of the funnest live shows I ever saw. They were on top of the world and knew it. It also didn’t hurt I had a great date that night. Unfortunately, like their opening act, the trivia question Re-Flex, Thompson Twins never escaped the 1980s.