Archive for the ‘mac’ Tag 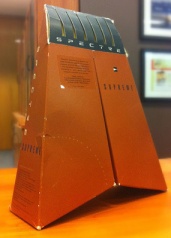 Once LANs (Local Area Networks) became commonplace in the early ’90s, it was finally possible to link up computers in the same room and play live head-to-head. While the Macintosh suffered from a dearth of games compared to what was available for PCs, we did have one classic to ourselves: Spectre. Widely considered the grandson of “Battlezone,” Spectre was a sci-fi tank game played on a TRON-like grid. And when “Spectre Supreme” came out, you could play against your friends on the LAN.

Around this time I spent a year working for a tiny design firm. It was just the two of us, the owner and me, and at the end of the day, we’d boot up “Spectre Supreme,” he in his office and me in mine, and spend an hour or so hunting each other down in cyberspace. It was the most productive we were all day.

[Photo via amatecha … for about a decade, computer game companies put a lot of effort into designing the boxes the game came in, and the Spectre series (Sumpreme, VR, etc) were notable for how elaborate and beautiful they were. Strange but true.]