Archive for the ‘records’ Tag 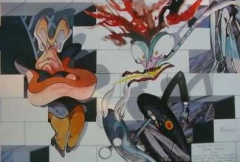 I was genuinely surprise to see the competition for this next slot. There was never any question “The Sound of Sight” would be on this list, or that it would kick off the countdown, so this position was the last opening for those records on the bubble. Should I pick Pink Floyd’s “The Wall,” the angsty rock opera with mind-bending album art by cartoonist Gerald Scarfe, or another favorite with an iconic cover: Electric Light Orchestra’s “Out of the Blue.” Or do I choose another high concept album, Thomas Dolby’s “The Golden Age of Wireless,” whose forlorn reverb kept me company many a late night in the studio during art school. 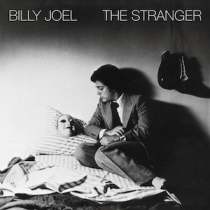 Finally, I decided to go with Billy Joel’s breakthrough album, “The Stranger.” You have to understand, while I always enjoyed Joel’s lounge act just fine, he was THE all-time favorite of my brother the pianist. (In fact, in a famous bit of family lore, my parents had to talk Brent out of quitting school and running off to New York to play piano in a bar just like Billy Joel did!) Even if Billy Joel’s singles weren’t ubiquitous in the Top 40 at the time, he was in heavy rotation in our house. Of all of his albums, “The Stranger” finds Joel at his pop-music best, before his high-minded ambitions outstripped his song-writting abilities in the 1980s. And as an awkward eighth grader trying to figure out girls, I greatly appreciated the double-sided coin of “Vienna” and “Only the Good Die Young” Joel tossed to listeners.

While I eventually grew tired of rock operas, even the very idea of rock operas, I still love the pop operetta Joel serves up in his “Scenes from an Italian Restaurant.”

I love lists. When I was a kid, I devoured every edition of the Guinness Book of World Records, bought all three volumes of the Book of Lists, and listened to American Top 40 every week. One New Year’s Eve I almost missed the ball drop because a local radio station timed Casey Kasem’s year-end countdown to end at midnight and I HAD to know what the #1 song was when they announced it (Debbie Boone’s “You Light Up My Life” if you’re curious … and yeah, I was as disappointed at hearing that as you no doubt are.) Heck, I even used to keep an AT40-style list of girls I liked in middle school, even though I was too shy and awkward to talk to most of them.

Over time I kept running tallies of favorite games and movies, and was always annoyed if a critic simply listed things in alphabetical order. Best of and Worst of Collections of are all well and good, but a numbered collection is even better. I wanted to know WHY they thought something was better than something else, and rankings will always win out. It’s silly, because I know so much of it is personal taste, and that quantifying quality is rarely an exercise in comparing apples to apples. (And the horse-race aspect of, say, weekly box office receipts may indeed be damaging to the very idea of quality and creativity. How often IS the top grossing movie actually the best movie of the year?) None of which takes away from the fact that one of your all-time favs may actually be a trashy piece of fiction —  as long as you KNOW its trashy and love it anyway.

So yeah — I love lists. And recently, when LOCUS asked readers to vote for their favorite sci-fi and fantasy novels (AND short stories and novellas and novelletes) of the 20th and 21st century, I found myself compiling yet another set of personal lists — and being challenged by what I found. And then I started thinking that next year I turn 50, and that I had all these lists around, many of which reached 50 or more entries … so I’ve decided to do a countdown to my birthday next year with a list of my all-time favorites — music, movies, books, games — one item each weekday for the next 50+ weeks.

Won’t you please join me on this horribly self-indulgent quest? Stop on back throughout the next year for the 50/50 countdown, and see if you agree with anything on my best of list. I look forward to the feedback /and snarky comments.

Coming Monday: My #50 record has THE GREATEST ALBUM COVER OF ALL TIME. Be here to find out why.